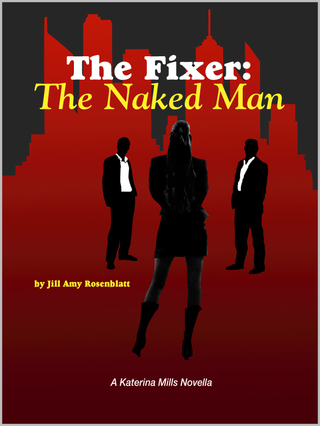 It's just a few hours away from July 1st and I then I will be able to say, "I can't believe I have a book coming out this month!!!!"

Someone is in here. Kat froze in the dark entranceway of her apartment. A rush of adrenalin shot through her. Her mind raced. Get out. Leave. Call the cops. She saw something on the floor. Ignoring her instincts, she stepped in further, knelt down, and picked it up; a tie. Her eyes had adjusted to the dark and she stood up, placing a hand on a chair; a jacket was draped over the corners. The tension leeched out of her body. She didn’t know too many burglars who broke into nondescript, low-rent apartments to strip. The bathroom door opened and a slash of light cut through the darkness.

Philip emerged, naked except for a towel around his waist. Seeing Kat standing with his tie draped over her fingers, he smirked.

“I hope your apartment is out of hot water,” she said, ignoring his remark.

His eyebrows quirked. “No, why?”

“How did you find me, Philip?”

He closed the gap between them. “I'm just back from Boston,” he said, caressing her cheek with a feather light touch of his fingers. "And I do have the skills to locate people."

The heat radiating from him made her breath catch in her throat. He was wearing his usual “come hither” smile. Kat knew what that smile meant: a lot of enjoyable moaning and groaning in the night followed by regret and self-loathing in the morning.

“You should’ve called,” she said, walking past him into the bedroom.

The bed had already been turned down. A bottle of wine and two glasses were sitting on the corner of her low dresser.

“We won’t be needing those,” she said.

“No love for a friend?” he asked, dropping onto the bed.

“You have lots of friends. You won’t miss one.”

“But you’re my best friend." He gave her a slow smile. "Aren’t you going to get undressed?”

Kat's lips tightened. She hadn’t seen Philip in months. It didn’t matter. The college frat boy good looks never changed, the shock of dark hair, the body, lean and fit.
“You don’t mind if I do then, do you?” he asked and the towel was off.

He lay on the bed, exposed without shame and she allowed herself to examine him openly. The ripple of muscle across his stomach, his broad shoulders, were an open invitation for exploration with hands, lips, and tongue.

“I would ask how goes the temp gal Friday gigs," he said, "but I can see by your new digs, not well.”

“Yes, you are. I bet they all tell you how much they love you.”

“I'm used to hearing that line,” she said. "I don't believe them either."

“You didn’t ask how things are for me,” Philip said, glossing over her comment.

“You don’t look unhappy,” she said.

Phil stretched his arms back, lacing his fingers behind his head. “Things are great but I screwed up, you know? I made a big mistake... letting you get away.”

"Not interested," she said, but the words had no bite.

She caught the soft expression on his face, the eyes narrowing to dark slits. All she had to do was say the word. His face said he knew she would. So did she. Already, her body was preparing, against her mind, her will, and her reason. The adrenalin of the evening’s activities was still pulsing through her veins, every nerve heightened, down to the tingling of her skin. She needed to take the pressure off.

“I don’t suppose you’d like to forgive me,” he said.

“Naked requests for forgiveness are a little tacky, don't you think?”

Philip rose from the bed and came to her. His eyes held hers as he slowly slid his hands from her shoulders to her waist. He undid the zipper on her jeans, peeling them down, revealing her black bikini panties. Kneeling down, he brushed his lips across her belly. She wanted to run her fingers through his hair, dig in, and hold on for what was coming next. He glanced up with a sly smile. When he stood he caught her sweatshirt within his fingers and slid it over her head, leaving her black lace demi bra in place.

He spent a long moment taking her in with his eyes. “I wasn’t a bad boss, was I?”

“I thought lawyers never ask a question they don’t have the answer to.”

“Who says I don’t have the answer?”

“You slept with someone else.”

“While you were sleeping with me.”

“I found her panties.”

“In your apartment. In your bed.”

Reaching around, he pulled the elastic band off the end of her braid. He slid his fingers through her thick chestnut hair, untangling the soft waves.

“Look at you," Philip said, his lips brushing her neck. "Barely two years ago you were a wide-eyed innocent, a mere foundling. Look how far you’ve come. But you’re not there yet, kid. Not by a long shot. You need me to finish your education.”

His arms tightened around her and his lips closed over hers. She could feel her resolve melting as her body heat rose. She would not let him get away with this.

“You know,” she said when she was sure her voice would be steady, “I really appreciate this "seduce the secretary" bit but I’m not moved.”

He snapped the clasp of her bra, exposing her full, rounded breasts and began slowly caressing her. Involuntarily, she shifted closer to him; a small sigh escaped her lips. Taking one nipple between his thumb and forefinger, he squeezed. She gave a small gasp and shuddered.

“I'm sure you are,” he murmured with a wicked smile. He slid his hand between her legs.

The relentless buzz of the alarm woke her. The early morning sun cutting through the cheap, flimsy curtains cast a rectangular pattern on the tangle of blankets. She lay still for a moment, trying to orient herself, listening to Philip’s soft, rhythmic breathing.

She stumbled out of bed and into the bathroom. Flipping the light switch, she turned her face away from the glare of the bulbs. After a moment she moved to the sink. She took a long look in the mirror, running her hands through her hair. Her cheeks had a soft, rosy glow. Making a sound of disgust, she bent over the sink, splashing water on her face. But she could still feel last night's warm, languid sensations permeating her body.

"Snap out of it," she muttered.

Reaching into the shower and pulling the top knob, she recited her daily, silent prayer that it wouldn’t come off in her hand. She waited for the gurgle and click that would signal a half-hearted spray of water was ready to begin. She hovered under the warm stream, wishing it could wash everything away.

She glanced over to find him propping himself up with both pillows. She continued to rifle through the closet searching for a suitable outfit.

“Wow, now that I get the full view in daylight, you are even more amazing than when I first met you,” he said. “Are you into yoga?”

“We are not having sex this morning,” she said, pulling out a blouse.

He gave a light chuckle.

She came to the night table and grabbed her earrings. He latched on to her arm and pulled her close.

“Good morning, gorgeous,” he said, his voice soft and low.

“What do you want, Philip?”

“What I’ve wanted since the day you left. Come back to work for me.”

She pushed away from him.

Philip swung his legs over the side of the bed and got up; he began pulling on his clothes. “You’re gonna drop dead working these crappy temp jobs, Katerina.” He glanced around. “This place is barely livable. The only thing you're missing is a colony of roaches you could charge a sublet fee. You’re never gonna make rent typing and filing and your father obviously can't pick up the slack.”

Kat didn’t answer. He's right. Every day, things are getting tighter. Little by little, I'm going under. Her parents hadn't sent money in weeks. She couldn't reach them by phone, no answer to her texts or emails; and her father hadn't paid the balance on this semester's tuition. Kat had done the math. To survive, she needed fourteen thousand dollars in two weeks.

“You want to be a lawyer, you need to work for a lawyer,” Philip said.

“I won’t be practicing your kind of law.”

He approached her and gave her a light kiss on the lips and then moved his lips close to her ear. “Can we just take a moment to recognize that you were incredible last night?”

The soft lull of his voice made her close her eyes; the nagging voice in her head kept saying she loved him. I'm supposed to love him. Her mindset of deluded innocence had been produced by a small town childhood where the message was unspoken but understood: sex means love. Love. What is that, exactly? What do twenty-three-year-old girls know about love anyway?

They stood so close she felt sure that he could hear her heart beating. His fingers sifted through her hair; a small sigh escaped his lips. For a split second he seemed like someone else entirely and then…“I wonder if you could hold on to something for me...”

“It’s not dangerous,” he said, tightening his hold on her.

“We’ve done this before.”

“That doesn’t mean we should do it again. There are lots of things we should never do again. Where’s the new secretary?”

Philip gave her his classic bad boy smile. “You were never the secretary. You’re someone I trust.” Pulling a letter-size envelope from his jacket pocket, he held it out to her. “I’ll pick it up in a week or two.”

She reached for it and he snapped it back.

He picked up her purse and opened it, slipping the envelope inside. “I'll feel better if it's with you at all times.”

Katerina opened her mouth to answer but Philip was already walking out of the bedroom, shrugging into his jacket.

She caught him at the front door.

"You're welcome," she said.

He turned to her. “I meant everything I said to you, kid, everything. Think about coming back. It’s a big, bad world out there. You’re not ready yet.” He winked at her and was gone.

She stared at her purse. He was right. He knew it. So did she.

Tossing the purse onto the chair, she went back inside to finish dressing.

Meet Katerina Mills, The Fixer. She'll solve any problem. For a price.

Kat's back and she's up to her neck and in over her head with cops, crooks . . . and killers.

Katerina Mills is back for her toughest assignment yet. Can she get the job done and get out alive?

For Better or Worse

Between old friends and new loves lies a world of possibilities...